skip to main | skip to sidebar

"if you see her, say hello"

EL HUMIDOR and MUDMAN sit in MudMan's basement. MudMan holds a strange sheaf of paper. Many sizes, many sources, all covered in the unmistakable Marx-a-Lot scribblescrawl of El Humidor.

She gets shot in the place, bleeds out, dies in Casey's arms. Damon, meanwhile, hijacks the train transporting the StealthCycle, after being blackmailed by a corrupt Internal Affairs agent named Cox. Damon calls his sister Lil' Kim and tells her to poison the well and put the family farm to the match. So already we know he's a wild card. Jump cut to Casey. He's in an ice cave, still stained with the blood of Milla; he's using the serrated back of his survival knife to cut down a shotgun. He chants "my hate keeps me warm my heat flames the hate in my veins, my veins shall form the nooses from which my enemies dangle". Then he uses his phone to to hyper-hack the Internal Affairs mainframe, in an effort to find the extra-train carrying the StealthCycle.

Strong Horse drifts amongst the stars. He is contacted by Milla, who promises to be his Rainbow Bride if only Strong Horse will strike down with super-lightning Lil' Kim. After a fistfight with a nimble, heavily-armed walrus, Casey crawls from the ice cave--just in time to see the extra-train thunder by. He stands, flummoxed. Lil' Kim cuts her way out of the downed walrus--actually some sort of walrus-disguise/powered battle-suit--and draws a bead on the back of Casey's neck with a high-tek crossbow. Strong Horse challenges Milla to a game of Solitaire.

Cox drives the extra-train thru the mountains of Iowa while delivering an impassioned soliloquy on the doublecross of Damon. Zombie Milla mounts the StealthCycle and rockets off to East Berlin, to visit the Kremlin, where the rest of her squad (a)waits, grimjawed. Lil' Kim contacts Strong Horse and Zombie Milla in turn, saying only to each "Package attained". Strong Horse knocks over his set of Chinese Checkers; Zombie Milla says only "Check please" before throttling up. Camera pulls back and Damon has been moving Lil' Kim's head like a ventriloquist's dummy. Casey's behind the counter of an inner-city convenience store, leafing through an issue of Fox, berating Cox for a bungled job. Cox sits with Lil' Kim, each dressed as a night elf, and as the camera pulls back, we see that Cox' cluttered office was just a set in the woods--12 white mages surround the 2, chanting in Gaelic as the screen fades to black. 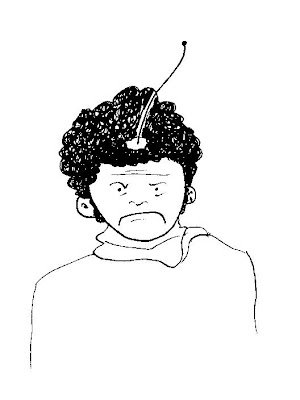 'At there's a nifty shot of Dik. Yah, he pretty much always looks that grumpy. You would too, if you were the brains of the outfit. 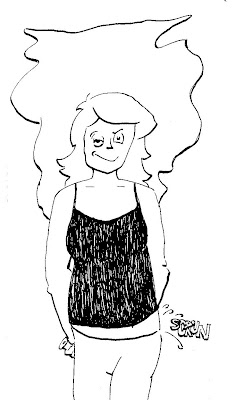 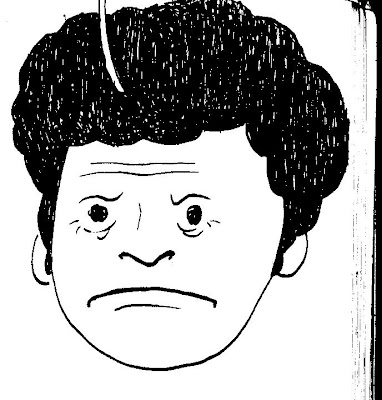 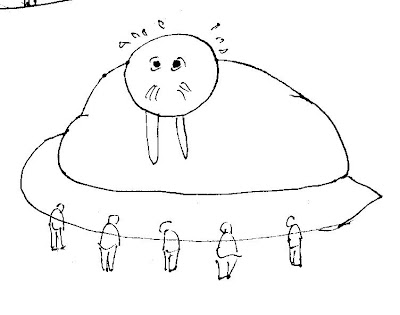 Cordwainer Sinterklaas: owner and bartender of the Arm Bar, where Our Heroes (?) hang out. A lot. Like, a lot a lot. Cordwainer's a walrus. Duh. 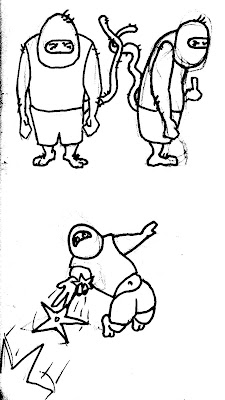 More Mun. What a charmer! And that tail! So dashing!! 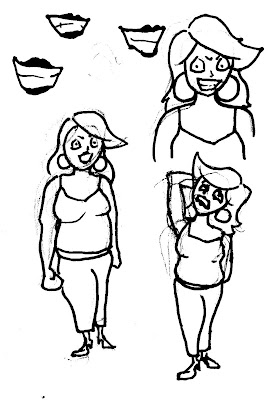 Just a few of the many, many moods of Hals. Kissable lips, grabable hips...pullable hair. Ahem. 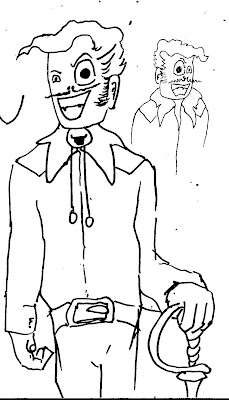 El Humidor!! Not one of Our Heroes, he's a member of the Antagonistas. Obviously, this here is a man who'll buckle yr swash something fierce, baby! We'll be hearing more from him a little later tonight, if my mind holds up. 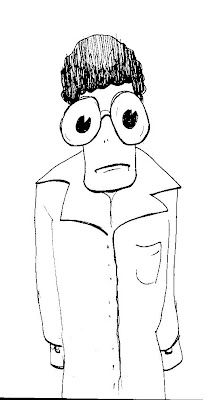 Ger Wrig, late of the G.I. Joe motor pool. Former teammate of CrankShaft, Lube Job, and the Lug Nutz twins. Scienengineer of the Antagonistas (note the lab coat). Not much of a drinker, but a kit-basher par excellance. Quiet, but never a rube.

(The characters of Ger and Humidor were created by Collision and Tinzeroes. All other characters by Tyler Stripes (mainly) and Collision.)
Posted by Chris Collision at 9:58 PM Links to this post

with a kind of lugubrious inexorability

Moving between sleep and 'wake this afternoon, thinking about meeting w/ Tyler later, I reconceptualize all the scraps and dabs I got. (Currently, I haven't any of the massive multi-issue epics I'm so known for.) I realize they're...compost!!

So here's to growing stuff.

-Collision
Posted by Chris Collision at 1:20 PM Links to this post

the anguish of obsolescence

I'm at a coffee shop, preparing to type up a script for Tyler so we can meet up in a couple hours and talk about balls. "Preparation" is mostly a code-word, obscuring the activity known to non-writers as 'dicking around on the inter net'. And said dicking comes to inform me that major inspiration Matt Fraction is...horror...younger than me.

Well, then. Back to work! I'm off...with a newly boosted sense of my own thorough inadequacy.
Posted by Chris Collision at 2:13 PM Links to this post

Here--eventually--will be found news, notes, draft scripts, and outtake art from the in-production comic the Wart. The first volume, Futurenow, will be available in spring of 08: please anticipate it!!

For now, any questions or support (beer, bourbon, delicious sandwiches, etc.) may be directed towards Chris Collision or Tyler Stripes, c/o Bars, Portland OR. We ain't hard to find.

-Collision
Posted by Chris Collision at 12:09 AM Links to this post